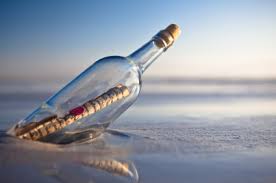 The bottle was released into the sea in 1904 by a renowned researcher named George Parker Bidder. These bottles allowed Bidder to prove that currents in the North Sea flowed east to west - very valuable information for local fisherman.

After 108 years at sea, the world’s oldest message in a bottle has finally made landfall. It was discovered by a Ms. Marianne Winkler while she was walking on the beach of Amrum Island, a small island off of the German North Sea coast, as reported by Amrum News. Apparently the bottle was released into the sea in the early 1900s, by a renowned researcher at the time named George Parker Bidder.

After finding the bottle, Ms. Winkler brought it home to examine it with her husband. It was then that they discovered a message in the bottle, instructing them to “Break the Bottle.” Inside was a postcard with no date but a return address, to the British Marine Biological Association. The message on the postcard, which was written in German, Dutch, and English, offered a reward of one shilling to the individual returning the card.

Records of the Marine Biological Association show that researcher Bidder sent about 1,000 bottles with messages afloat in the sea, as part of an experiment he conducted between 1904 and 1906. With the assistance of these bottles, Bidder was able to prove for the first time that currents in the North Sea flowed east to west, which to be very valuable information for local fisherman.

The Marine Biological Association is still waiting for the bottle to be recognized in the Guinness Book of World Records. Meanwhile, the couple that found the antique bottle can’t wait to return to Amrum Island for another visit next.