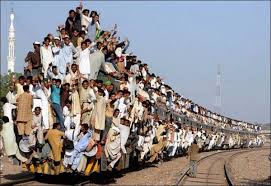 The primary driver of the dramatic increase is a near-certain population explosion in Africa, which will occur over the next 85 years.

The world population could surge to an astounding 11 billion people by 2100, according to the UN’s 2015 World Population Prospects Report.

By comparison, today’s world population is about 7.2 billion.

In the United States, the population is projected to increase by 40 percent, from 322 million people to 450 million, between today and the end of the century.

According to John R. Wilmoth, Director of the UN Population Division, the primary driver for the increase is a population explosion in Africa that is expected to triple or quadruple over the next 85 years.

By the end of this century, Africa’s current population of 1.2 billion is expected to jump to between 3.4 billion and 5.6 billion people.

Africa’s total fertility rate has been in decline over the last decade, but it is still only a quarter of the decline rate experienced in Asia, Latin America and the Caribbean during the 70s. Asia, which is the most populous continent with 4.4 billion residing there, is set to peak at around 5.3 billion in the middle of the century, before falling to 4.9 billion by 2100.