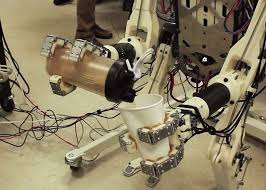 Later-generation HERMES robots may be used a first responders to disaster sites.

Meet the latest robotic wonder to emerge from MIT’s Department of Mechanical Engineering: the surprisingly puppet-like HERMES. Unlike its predecessors, HERMES’s actions are controlled by a human being wearing an exoskeleton of wires and motors.  Each human movement is translated instantly to HERMES, much like a puppeteer controlling his marionette.

One potential use for HERMES is as a first responder to disaster sites. Under the guidance of a human operator from a remote location, HERMES would be able to explore the affected area. The research was partially funded by the Defense Advanced Research Projects Agency (DARPA).

“We’d eventually have someone wearing a full-body suit and goggles, so he can feel and see everything the robot does, and vice versa,” says PhD student Joao Ramos. “We plan to have the robot walk as a quadruped, then stand up on two feet to do difficult manipulation tasks such as open a door or clear an obstacle.”

HERMES’ design allows it to take advantage of a human’s split-second reflexes, which gives it a much faster reaction time in terms of adjusting its balance than it would have based on visual feedback from onboard cameras.

Additionally, its unique balance-feedback interface allows its human controller to remotely feel the robot’s shifting weight and quickly adjust the robot’s balance by shifting his own weight. As a result, the robot can carry out momentum-driven tasks — like punching through walls, or swinging a bat — while maintaining its balance.

“We’d like to use the human’s natural reflexes and coordination,” explains Ramos. “An example is walking, which is just a process of falling and catching yourself. That’s something that feels effortless to us, but it’s challenging to program into a robot to do it both dynamically and efficiently. We want to explore how humans can take over complex actions for the robot.”